x
by STHS_Eagles
on
under Cross Country
∞ Permalink 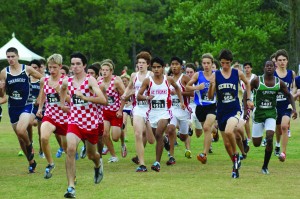 After coming up just short of a State Championship at the 2010 TAPPS meet, the Eagle Cross Country team had their eye on breaking through in 2011. The teams once again swept the District meet, as the freshmen, junior varsity and varsity each placed 1st.

Racing just over two weeks later in Waco, the varsity came up shy of the TAPPS State title once again, this time finishing third behind Antonian Prep and Nolan Catholic. Troy Harrington led the Eagles, finishing 13th in the field of 105. He was the lone participant from St. Thomas that was a senior, as the other six runners were either sophomores or juniors.

“Our showing at state was solid, and I was pleased with the dedication and commitment the team showed during the year,” head coach Nathan Labus said. “The experience gained by some of the younger runners will help them greatly going forward.”

The Eagles will have all three major award winners for the season back on the squad in 2012. Nicholas Matthews was given the distinction of MVP and is now a three-year letterman heading into his Senior year. Eagle Heart Award winner Adrian Alba broke through with a strong showing a year ago, and Most Improved Player Harrison Grant will also be counted on for the Eagles. Add in three-year letterman Jo Alan Castilleja, and this squad becomes the strongest St. Thomas has had in years.
“I am optimistic about the season, given that we have some leaders that are going to help our team but also mentor the younger runners,” Labus said.

Matthews, Alba, Castilleja and Grant all competed at the TAPPS State Meet in Waco, as did Peter Hawkins, who is a one-year letterman. They will be joined by a group of talented runners who participated on the junior varsity squad in 2011. In the District 3-5A meet, the Eagles’ JV team took the top 8 slots. The Freshman team enjoyed terrific success during the year, preparing the newest runners for stellar careers at St. Thomas.
The team will once again have a busy schedule through the fall, with the district meet held at Buffalo Bayou. The State Meet will be in late October, as the quest for the school’s 2nd Cross Country State title continues.

“No team out there will be as prepared or motivated to get the championship as our’s,” Labus said. “The spirit and passion our student athletes show by running year-round and training for the season are tremendous.”